This scenario is unfortunately far too common in those seeking help for mental illness. Adult mental health services are often only able to treat the most severely ill, with their treatment focus on those with severe and enduring mental illnesses, such as psychosis or bipolar disorder (McGorry, 2007). This has led to strict eligibility criteria to be put in place when assessing whether someone is suitable to be cared for at their service, something thought to be in part due to a lack of funding and resources (Belling, 2014). If someone visits A&E with a broken arm we don’t wait for it to get worse before we treat it, so why does this happen if someone goes to their doctor with signs of an eating disorder? A recent investigation by the British Medical Associate found waiting lists of up to 2 years in some parts of the UK, (BMA, 2018). Once again this shows the disparity between our attitudes to physical vs mental healthcare.

According to the eating disorder charity BEAT, some people had to wait an average of 182 days to access care in some areas of the UK. This is despite all evidence pointing to the advantages of early intervention: an individual with an eating disorder is 50% less likely to relapse if they can access treatment early. Treatments have also been shown to be more effective if accessed at an early stage (BEAT, 2018). 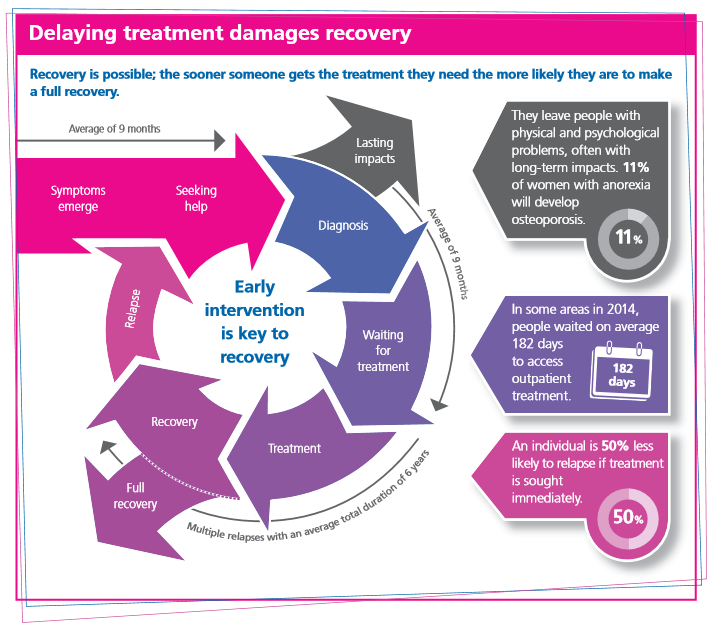 This problem isn’t just specific to the UK – one study of carers with mental illness in Australia found that they had to push for their relatives to access appropriate care, with one of the main barriers being that they were not ill enough to be admitted to hospital for their mental health, in some cases despite being suicidal (Olasoji, 2017). Another study looked at the treatment gap in different countries (the percentage difference between the numbers needed treatment and those receiving treatment for it) and found the treatment gap for major depression to be between 36% in the Netherlands to 73% in Finland (Kohn et al, 2004). The international nature of this disparity in mental health care shows how global attitudes to mental illness need to change to allow people to access appropriate treatment as soon as they need it.

Young people can also experience disruption to care due to not meeting the eligibility thresholds in adult services, despite being eligible in the children’s service. In contrast to adult mental health services having high thresholds for care, those at children and adolescent mental health services can be much lower. Children’s services are generally perceived as being more supportive and nurturing than adult services, with a focus on treating emotional and developmental disorders, including autism and ADHD (McGorry, 2007). However this means that when young people reach the upper age limit of children’s services (at around 16-18 years old), they cannot be transitioned to adult care, as they do not meet the eligibility threshold. Therefore at this transition boundary, young people can ‘fall through the gap’ between services despite still being unwell. One study in Ireland estimated that two-thirds of young people do not receive a referral to adult services, despite still being unwell when they reached the upper age limit of children’s services (McNicholas et al, 2015). Those who do receive a referral can still experience a gap in care: adult services can have waiting lists of up to 6 months (Hovish et al, 2012).

It is clear that something needs to change to ensure that people with mental illness are able to access timely and appropriate support, without having to wait for their condition to get worse in order to qualify for treatment.

Please share and let me know your thoughts using the hashtag #MHAW18 and help raise awareness.