Imagine if you saw music in colour, or if the letter ‘e’ always reminded you of a specific shade of yellow. Sounds weird, but these symptoms occur in people with synaesthesia: senses that are usually unrelated are automatically joined together to form a unique sensory experience. This can take the form of stimuli being assigned a particular colour, or being viewing in a certain pattern (known as spatial-sequence synaesthesia) e.g. numbers on a number line that is seen in spirals or circles.

Below is an example of how one woman with synaesthesia sees days of the week and numbers:

Before I learnt about this topic at university, I didn’t realise that how I picture the months in my head sounds slightly like synaesthesia – when I imagine a month of the year, I see them all in a wonky oval, with me standing in the middle. While my months aren’t associated with colours, they do look something like the image below which I found online (apart from I’m facing December, not June)! Random fact about me.. 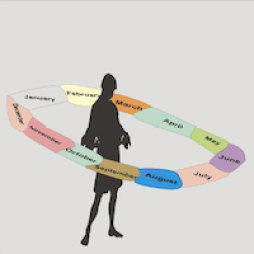 Several researchers have tried to find out if synaesthesia is something you are born with, or something which is acquired.

Baron-Cohen et al (1993) compared 9 synaesthetes who saw colours when they heard words with 9 matched controls. They had to describe which colours they perceived when they listened to over 100 words, which was repeated 1 year later. They found that after a year, 92% of the synaesthetes responses were the same, compared to just 38% after 1 week for the control participants. The results from this study rule out any involvement of memory or mental imagery, showing that synaesthesia is consistent throughout time.

Any studies which have tried to teach participants without synaesthesia associations between colours and other stimuli have failed to show any evidence for synaesthesia being learnt, even after 1000s of trials.

But why does synaesthesia occur? One theory is that there is increased cross-wiring between brain areas (Ramachandran & Hubbard, 2001) so that colour and auditory areas are activated by only auditory stimuli, for example. Several studies have also used functional imaging to show that other brain areas are activated in people with synaesthesia, for example Nunn et al (2002). This study used participants who saw colours when they heard words, and found that areas V4 and V8 – the areas in the brain responsible for colour perception, were activated by speech. Importantly, this was not shown by controls who were asked to imagine colours in response to hearing words.

Thank you for reading this post – I hope you find this topic as interesting as I do! Check back next Thursday for a new post, have a great week 🙂