Can you imagine only being able to see one thing at a time?

This is the struggle faced by patients with Simultanagnosia – an extremely rare visual disorder. The reason this is so rare is that it is caused by damage to the posterior parietal cortex (shown in light blue below) but on BOTH sides of the brain.

The damage to the brain is thought to cause deficits in grouping stimuli, although this is thought to be due to impaired attention rather than impaired perception.

For example, Luria (1959) found that if patients were shown a star of David with one triangle blue, one red, they only reported seeing one of the triangles, however if the triangles were the same colour, they saw the whole shape. 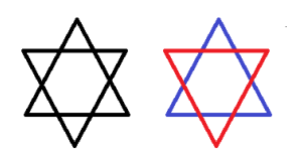 This result is interesting, because both shapes take up exactly the same amount of space on the retina, which shows that this disorder isn’t caused by a restricted visual field.

Patients also show a bias for local rather than global stimuli – this means they focus on small details rather than the overall shape.

This was shown in an experiment by Shalev et al (2008). The stimuli used were big letters made up of little letters e.g. lots of little H’s forming one big H. Healthy participants are quicker at identifying the big letter when it is made up from little letters that are the same, compared to when they are different, e.g. a big H made of little D’s.

However, Simultanagnosia patients do not show this pattern of results – instead they are faster at identifying the small letters regardless of whether they are the same as the big one. 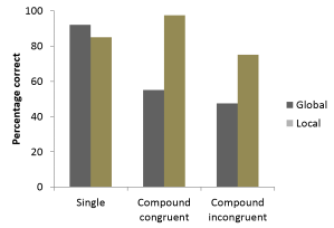 As you can see from this graph, Simultanagnosia patients get a high percentage of single letters correct, but are impaired for the global (big) letter when it is made of smaller ones, regardless of whether they are the same or not.

One way to help patients see more than one item is to group items together.

For example, although patients cannot read text, they can read single words as the letters are grouped together. Hall et al (2001) found that familiarity of words also helps them be identified, as patients are bad at reading non-words. They also presented patients with acronyms (e.g. NHS) presented in capitals (familiar form) or in lower case (unfamiliar form). They found that Simultanagnosia patients could only recognise the acronyms when they were in capitals, showing that familiarity helps patients recognise the global form.

Thank you for reading!