Have you ever wondered how scientists work out that certain structures in the brain are responsible for certain functions? For example, that the back part of the brain is responsible for vision, or that the back of the frontal lobe is what enables us to move. This information has been gathered using various neuroimaging methods in experiments where participants have to perform a specific action, for example processing face stimuli, while their brain is scanned to see which area is showing the highest activity. This pattern of activity is compared to brain activity while participants are carrying out a different visual task. Subtracting one pattern of activity from the other leaves activity in the structure active during processing face stimuli. Kanwisher et al (1997) did an experiment similar to this, and identified an area on the fusiform gyrus specialised for processing face stimuli, which is now know as the fusiform face area.

In this post, I will give a quick overview of the 4 main methods used in neuroimaging experiments: fMRI, CT, PET, and EEG.

Also know as functional magnetic resonance imaging, this method works by measuring the changing amount of oxygen in the blood, which equates to changing neural activity. If an area is needed to be active for a particular task, more blood flows to that area as it needs more oxygen, just like how blood flows to your muscles during exercise. The fMRI scanner sends out magnetic fields, which hit protons in the hydrogen atoms in your blood. The signals reflected back to the scanner from the protons are strongest in the blood with the most oxygen in, so we are able to detect the areas of the brain which are most active. 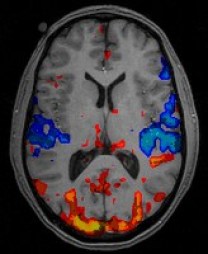 The researchers are able to add colour to the areas of the brain showing varying amounts of activity.

A CT (Computed Tomography) scan uses X-rays to map structures in the brain. As X-rays are absorbed by bones well, but not by water, you can use CT scans to identify different types of tissue in the brain e.g. tumors or lesions. In the image below, you can see the ventricles (black areas) compared to brain tissue (grey areas)

Positron Emission Tomography detects the positrons emitted as a radioactive tracer which has been injected into the blood, decays. This uses the same kind of principle as fMRI in that areas which are active have the highest blood flow, and so more positrons will be emitted from areas which are the most active. It is used to identify degenerative disorders such as Parkinson’s disease. The scan below shows PET scan results for healthy individuals and those with Parkinson’s:

Electroencephalography maps brain activity by measuring the electrical activity of the brain by picking up signals from electrodes placed on the scalp. This is slightly less precise that other methods, as it picks up signals from a large amount of neurons. However, it has high temporal resolution, meaning it can detect changes in brain activity almost as soon as they occur. As this method is cheaper than the others, it is often used in research.

The image below shows a participant during an EEG experiment:

I hope you found this interesting, let me know if you find this kind of thing interesting and check back next week for a new post! 🙂