Post – traumatic stress disorder, or PTSD is a type of anxiety disorder which is characterised by:

It has a lifetime prevalence of about 8%, and is more likely to occur in women than men. 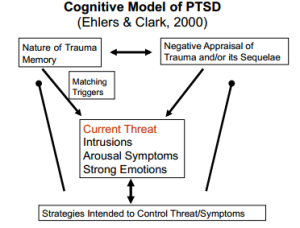 This has been explained by the Cognitive Theory of PTSD (Ehlers & Clark, 2000), which states that the sufferer views the traumatic event in a way which produces a sense of serious current threat – they believe they are still in danger.

This is caused by 2 processes:

They could believe they are still in danger as they could interpret the world as being a very dangerous place, or thinking that it was something about them in person that caused the traumatic event to happen.

These processes generate situational fear and avoidance, and therefore maintain fear and anxiety.

The 2nd process which contributes to anxiety is that the memory of the trauma is often poorly elaborated – it is muddled up and not integrated with other past memories. Foa & Riggs (1993) found that sufferers of PTSD can have difficulty intentionally remembering the traumatic event, but have regular involuntary ‘flashbacks’ which are very vivid and emotional. These memories are experienced as being in the present, so act as a source of current threat.

Cognitive therapy for PTSD therefore aims to change the individual’s appraisal of the trauma, so they don’t think the threat is current, as well an integrating the memory into other past experiences. It also encourages sufferers not to try and repress the intrusive memories, as this can actually have the opposite effect and make them think about it more. Finally, it aims to reduce safety behaviours such as avoiding reminders of the trauma e.g. not travelling by car after being in a car accident.

Cognitive Behavioural Therapy is the NICE recommended therapy for PTSD and has been shown to be more successful than other therapies such as drugs or counselling.

Thank you for reading!