Sorry this post is a day late – I had a job interview yesterday so didn’t have any time to write a post! This week, I thought I’d write about Piaget, who is regarded as the first psychologist to study cognitive development in children.

He then categorised his findings into four stages of development, which he believed that all children must go through in order. These are shown in the image below.

In this stage, infants knowledge of the world depends on their interactions with objects, and they are always experimenting with new objects. An important part of this stage is learning object permanence – that objects will continue to exist even when the infant cannot see them. Their knowledge begins to increase as they start to move around and learn to talk near the end of this stage

Young children in this stage are learning to write and draw. However, at this stage they struggle with object constancy and logic. For example, they do not understand concepts of quantity and volume. Piaget demonstrated this in several experiments which involved manipulating the shape of objects. For example, he showed the child a short, fat beaker with water in, and asked them to say when he had filled an identical beaker with the same amount of water. He then poured the water from one of these beakers into a tall thin beaker, and asked them which beaker had more water in, or if they were the same. He found that children in this stage would pick the tall thin beaker, as they are influenced by the increased height. 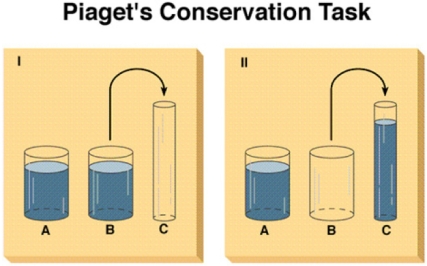 Children in this stage have an improved understanding of logic, and are able to answer the above questions correctly, although they will struggle with more abstract concepts. It is during this stage that children develop a theory of mind, and realise that others can have different thoughts to them.

Children in this final stage have a better understanding of logic and the world around them. They are able to apply their existing knowledge to solve problems and think more scientifically. They are also able to use abstract concepts such as algebra. This stage is the basis for an expansion of knowledge during adulthood.

Piaget emphasised that there is not just a change in the amount of information the child has as they get older, but a fundamental change in how they think about the world.