Following on from the post about my dissertation.. now on to the next thing that’s been taking up quite a lot of my time this year – my research project. For this part of my degree, I had to carry out my own experiment on something which had not been shown before, and analyse the results.

To start, I should probably make clear what nostalgia is: it is defined as a
“sentimental longing or wistful affection for a period in the past”

The problem I identified with existing research was that most experiments manipulated nostalgia by asking participants to write down a nostalgic or ordinary memory, reading words that describe nostalgia and writing a memory based on them, or by listening to a nostalgic or ordinary song. These methods are fine if you then want to find out about effects of nostalgia, but are they equally effective in inducing nostalgia?
Nostalgia is also a very social emotion, and a study has shown that thinking of a nostalgic memory involving an out-group member leads to fewer feelings of prejudice towards that person (Turner et al, 2012). If nostalgia is a social emotion, then I hypothesised that reading someone else’s nostalgic memories could cause you to feel nostalgic. There had only been one study which found that nostalgia could be induced by reading someone else’s old love letters, or looking at their old photos. I decided to present participants with an actual nostalgic (or ordinary) memory narrative from someone else, and told participants the memory was from someone similar or dissimilar to them in age (to see whether similarity affected results). I compared how effective this method was with a previous method of making people feel nostalgic – giving participants a list of words that described nostalgia, or were more general, and asked them to write a memory based on these features.

Similarity:
The reason I thought that similarity would effect results was because of principles shown in social psychology – it has been found that when people are categorised into groups, they will automatically perceive themselves as being more similar to other in-group members, and therefore more dissimilar from out-group members (Tajfel & Turner, 1979). Therefore, the perceived similarity of the reader to the person who wrote the memory could increase the amount of nostalgia transferred to the reader of the narrative. I called this a similarity-based “transfer effect” of nostalgia.

Design of Experiment:
– 121 participants, all between the ages of 16 and 24 (so I could manipulate similarity by age)
– Participants split into 6 groups: nostalgia similar, nostalgia dissimilar, ordinary similar, ordinary dissimilar, central features (write memory) and peripheral features (write memory).
– At the top of the memory narratives, a sentence explained this was ‘an actual memory from someone aged 20 (similar condition) or 60 (dissimilar condition).
– After participants had either read the memory, or read the features and written their own memory, they then completed a questionnaire to assess how nostalgic they felt.

Hypothesis 1: Reading someone else’s nostalgic memory did make people feel more nostalgic than those who read an ordinary memory. 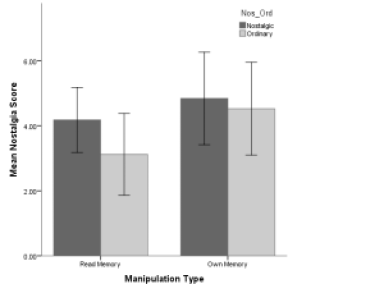 The results of my experiment are the first to show that people can be made to feel nostalgic by reading someone else’s nostalgic memory, and that the amount of nostalgia felt depends on how similar the writer of the memory is to the reader. Therefore, it sets the basis for more research to be done on different ways of manipulating similarity and other ways of inducing nostalgia.

Hope you found this interesting and let me know if you’ve got any questions – I know this is a really complicated experiment!