This post will explore a bit deeper into the functions of the brain – in particular how the brain learns to coordinate our movement and behaviours.

To put it simply, mirror neuron ‘fire’ a signal when an individual is carrying out an action or when they watch another person carry out the same action. This was first shown by Rizzolati et al in monkeys, when they found that the same neurons fired when they put a peanut in the their mouth, and when they watched another monkey do the same. This same effect was later found in humans.

Although this might seem useless, mirror neurons are thought to be involved in helping us learn to carry out new actions and social behaviours. They are located in the front part of the motor cortex, called the premotor cortex (shown below). 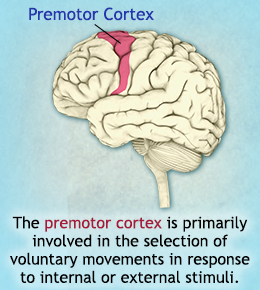 How else are mirror neurons important? Williams et al (2001) reviewed the evidence for a hypothesis for autism which states that certain social deficits are caused by problems with these mirror neurons, and concluded that early deficits with these neurons result in a “cascade” of later social issues. One of the characteristic deficits in children with autism is a lack of a ‘theory of mind’ (Baron-Cohen et al) – read more about this here. Theory of mind is the ability to know that others can see the world differently to ourselves. Several studies have shown that early imitation plays a role in developing social behaviour, as well as the fact that autistic children can show deficits in imitating actions. A slightly different view has also been put forward – that mirror neurons directly allow us to understand others (and so develop theory of mind). Baron-Cohen et al (1999) provided further evidence in an fMRI study, and found that participants with autism showed less activation of mirror neuron areas during a task which involved interpreting emotions (when compared to controls).

Although it is definitely too simplistic to view autism as solely a disorder caused by a problem with mirror neurons, I found this link really interesting and thought I’d share it with you all. Thank you for reading – see you next week and for those of you who wanted to read the whole Williams et al paper find it here.