Although you might think that the structure of your brain is formed before you are born and does not change, this actually isn’t the case. As we grow and learn, the brain is constantly making new connections and pathways between different areas. It used to be believed that anything which had not been developed by a ‘critical period’ during childhood would be lost, with little change after this time, although we now know this is not true.

For example, our different skills and experiences can help to shape our brain. This has been particularly studied using musicians, as extensive practice and repetition of certain fine-tuned motor actions can result in more of the motor cortex being involved in directing the actions of the hand and fingers.

Pascual-Leone et al (1995) found that novices learning to play a simple exercise on a piano over 5 days showed an increase in size in the cortical areas involved in the movement of the fingers. Schlaugh (2001) carried out fMRI to compare the size of the intrasulcal length (part of the motor cortex) in professional musicians and controls, and found it was much longer for musicians in the right hemisphere (which controls the left hand). This is shown in the image below, taken from this paper. 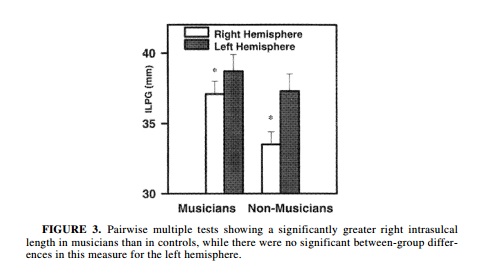 It is through the process of brain plasticity that new memories are formed. Motor memories such as becoming more accomplished at music are one type of memory which alter the brain structure, but our personal memories also change our brain. This occurs through the process of Long-term Potentiation (LTP), which is the process of connections between cells at synapses strengthened. It mainly occurs in the hippocampus and other cortical areas responsible for our long term memories. This process is illustrated by the image below:

Brain plasticity is also encouraged in treatment and rehabilitation from brain injury. For example, after a stroke it has been found that giving excitatory stimulation to the damaged areas can improve function (e.g. improving language function – Szaflarski et al, 2011). Just by encouraging movement in people who have had a stroke can also help them to regain function of limbs on their impaired side.

Thank you for reading and don’t forget to check back next week for another post!